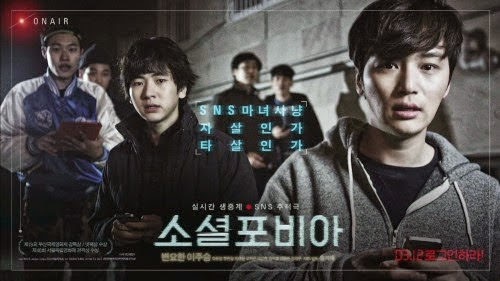 Introduction
“Techno-thrillers” movies or more accurately “Technophobia” movies have a long history of doing a job on the public mindset regarding new developing technologies while totally getting most details about those technologies wrong.

“Social phobia” (2015) is proudly following those movies’ footsteps. It is a straight “Technophobia” movie that shows an awful lot of “Twitter” screens through its 102 minutes run time. I think there are 15 minutes of just tweets on screen in total. And to be frank, those tweets are the more interesting parts of the movie. The saying goes…

There is no such thing as bad publicity!

And I would say that I wanted to use Twitter more after watching this movie, which goes against what this silly movie wants to say.

Scooby-Doo,
Where Are You?

Basically, the movie starts with an internet “Twitter” flame war between this girl and a group of early 20sguys. Before anything, all of the movie characters are “Trolls,”…I mean of the internet variety. None of the characters are, let’s say, innocent of being that! This early 20s gang starts internet-stalking her until they find out where the girl is staying and goes to crash her place while streaming online video.

These are our protagonists!
Ladies and Gentlemen

When swarming to the girl’s place like starving hyenas, they find the girl hanging from the ceiling by a “LAN” cable.

Do hyenas swarm?
In any case, imagine the gang from the movie “Clockwork orange” (1971)
But less rape-y!
Well, just a little less
Rape-y!

After this incident, because of a combination of selfish motivations, including being bored, the gang bumbles around to find who killed the girl even though there is no evidence that she was killed.

Being Indie does not let you off for a stupid script!

Where are Seth Rogen and James Franco when you need them?

Thus, the detective stuff is just

The movie is not interested in the actual murder case since it has utterly no interest in the victim. The only information you get about this woman is internet rumors except for one scene where you get an exposition dump via another woman’s “hearsay” testimony. In fact, the movie deliberately does not show the victim’s face until almost the end, where we see a picture or two. But I do not really know why the movie even bothered with this since it does not really make a difference.

Girls on the Internet are not People!
Right?

If you think about it, Socialphobia (2015) has a strong vibe of Misogyny to it. Throughout the movie, there are only two female characters in the movie. One is a victim, and the other is an extra who is in one scene. This victim is really only portrayed as this socially awkward “bitch” who was also a victim. The rest of the actually important characters are all men in their early 20s. From them, I could not help but grab a figurative “Rape” gang image them.

So, none of the characters are viewed in a kind light. This touches on the purpose of the movie: all people, mostly men and some women heavily into social media, are weirdos at best and, at worst, are monsters that would destroy good non-“tweeting” folk.

What Characters? There are no characters in the movie!

While I have problems with this purpose, I can roll with it. I am not a person who is Squamish about an opinion. However, because of this purpose, the characters in this movie lack characterization other than being in this gang.

I have problems with this!

It took me 30 minutes to recognize who the main protagonist is and an hour to grasp what his role was in the story. Considering I am a Korean and most Koreans do not look alike, this is a problem.

As a side note, the main protagonist’s role is as the gang’s straight guy that helps the audience ease into the crazy world of “Twitter” trolls. There is barely any difference between him and the other trolls that I could not get until half of the movie had passed. This lack of character definition also goes for all of the other paper-thin characters.

Even though the script is just terrible, you can just see that the director of the movie was far better than what the script deserved. The director seems to have known exactly what this movie was and done the utmost to work with it.

This should not be weird since the director also wrote the movie.

For one thing, the movie’s pacing never really bogs down in the dull dialogue and scenes put on paper. The movie keeps moving at a consistent pace. Regarding the visuals, the movie does a lot with its limited budget as the screen is filled with normal places in Korea that were filmed to give off a monstrous dungeon-like vibe of Korean internet trolls. I would recommend the movie if you want to get gimps of a Korean society’s side not shown a lot, albeit exaggerated.

In regards to the acting, none of the actors have much screen presence and much acting talent. However, they did what was required of them by the terrible script, which is not the result of them but the director’s direction.

Finally, while I got bored with all the Twitter screens in the movie, I have to say that the director did a lot of work to make tweeting seem interesting on-screen even though he failed ultimately.

“Social phobia” (2015) is basically about internet trolls eating each other because “Twitter” is evil. That’s what the movie boils down to. The Internet and “Twitter” is just a hellish space of gossip and hatred. While I do not totally disagree with this statement, the movie does not go beyond this superficial “Luddite” view of technology.

It does not go deeper than blaming technology for all the shittiness of Koreans on the internet. I would go further and say Koreans were shitty even before the internet.

Ultimately, while the movie had some interesting directorial efforts put into it, I was rather bored throughout. And it is not because it was an indie movie or anything. It was just that the script was not good.

Thus, I give the movie a C.